Eric Malouff, CEO
The era of digitalization is finally dawning upon the construction industry, leading to the associate industries offering simple and easy-to-use technological solutions. The need for such solutions is imperative for a sector witnessing less efficiency for over two decades. According to McKinsey's Reinventing Construction report, construction's productivity has grown by only 1 percent over the past two decades, much lower than the average increase of the total world economy (2.8 percent). The choice of an IT partner is paramount to bringing in the required efficiency. Since accounting helps the operations run smoothly, organizations can enter the digital world by overhauling their accounting system.

Enter TimeSuite ERP.
TimeSuite ERP has developed a relational architected product to meet the needs of the industry. "We addressed the need of a dynamic and flexible accounting/ERP system that is pliable and grows with the organization," says Eric Malouff, CEO, TimeSuite ERP. The company has translated its experience with various systems on the market into a TimeSuite ERP product that works on what Malouff calls gained efficiency - setup and modified per the changes in an organization's workflow at any point in time. The processes are developed based on the client's requirements where nothing is hardcoded, and architecture is adjusted on a need basis.

TimeSuite ERP represents a complete redesign and rewrite of TimeSuite's legacy "Toolbox" system. The redesign began in 2011 going through 11 refactoring architectural iterations with the belief that with a perfected core, software development of a comprehensive system can be simplified. In 2017, TimeSuite retooled using Google's Dart and Flutter Technologies, and began building out a web and mobile interface with initial client use in mid 2018. The product interfaces with the same database as the "Toolbox" system, allowing TimeSuite to tap their current client base for consistent implementations as the product was built out. TimeSuite ERP is designed to automate accounting processes and cost controls.

While we’re the most comprehensive system out there, we’re also the easiest system to use

In addition, TimeSuite ERP automates the mechanics of the Percentage of Completion method of accounting including automated accrued wages, automated accrued over/under billings/WIP, a full summary of contracts, retro-active allocation of over/under indirect costs, and tools to analyze the historical project projections' impact on previous financials. If an accountant wishes to import transactions from other sources, they can do so with CSV or Json files. Further, the change logs can help users understand the changes to all the records. The automated audit trail automates creating, reversing and correcting entries on accounting transactions.

For visibility and communication, the company has developed an internal report writer, centralized email, text messaging, notifications, drilldown to detail, document control, task management and resource scheduling. TimeSuite ERP can interact with the banking system to download bank and credit card transactions. The company performs implementations with a core objective, to keep things simple. "We want our system to look as small as possible so that clients are focused on what they need to be focused on," says Malouff. "While we're the most comprehensive system out there, we're also the easiest system to use." The system's efficacy can be gauged from the fact that one of the largest homebuilders in the U.S. has trusted TimeSuite ERP to outperform its competitors. "Our client tells us that they would have three times the accounting staff if they used any of our competitors," says Malouff.

Be it CRM processes, sales processes, or production processes, TimeSuite ERP can achieve it in a minimal number of steps. Hence, a highly customizable solution has been able to cater to the needs of the industry and enabled the company to grow at a controlled pace. Malouff emphasizes wanting to continue to grow in the same fashion. While TimeSuite ERP is poised for rapid growth, they are focused on bringing as many accounts as their infrastructure will facilitate and have a controlled growth approach. 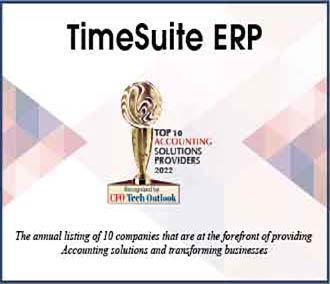